The journey of Team Red Baron began way back in 2011 when a group of 25 undergraduates dared to do something different. They came up with an idea of forming a team which will build an All-Terrain Vehicle (ATV) to compete in the prestigious competition of BAJA SAE India. A team was formed and the name was derived from the nickname of Capt. Richthofen, the most fearsome pilot from the World Wars who ruled the skies.

The era was different but the determination was the same. Keeping this aim in mind, the team toiled through days and nights to turn its dream into reality. The outcome was Albatros 1.0, the first vehicle in the Albatros line-up. It competed in BAJA SAE India 2012. In the very first competition, Albatros 1.0 was ranked 34th nationally. 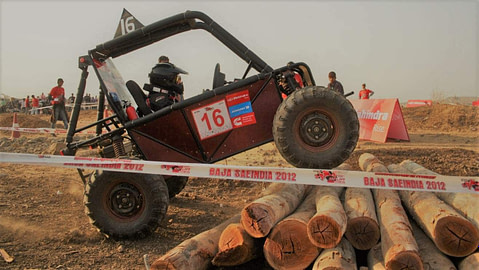 Since then, things just got better. Albatros 2.0 was built the following year to compete in BAJA SAE India 2013. The most notable innovation was the Independent leaf spring front end suspension, which also got selected among the top 5 innovations. Overall, the vehicle was ranked 30th out of 125 teams. 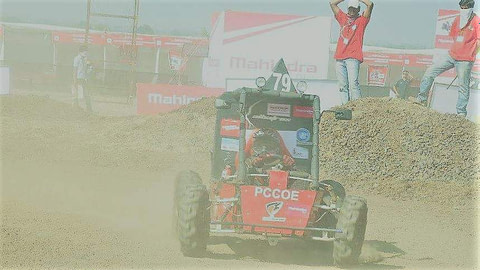 The upgrades continued and resulted in building Albatros 4.0. Improvements included better performance in hill-climb and acceleration. Also significant was the fact that the vehicle completed the 4-hour endurance race for the first time without failure, ranking 12th.

Albatros 6.0 was a highly successful vehicle, bringing back home numerous glories. Among them were 1st prize in Design event, 2nd in Endurance race and Cost event and Overall Runner-up in Enduro Student India 2017. At BAJA SAE India, Albatros 6.0 was the 7th fastest vehicle and 9th overall in India. The vehicle also participated in MegaATV Championship 2017, grabbing 5 awards which included 1st in Blackout endurance race and 1st in Drag Race and Overall Runner-Up.
Also, Albatros 6.0 was our First vehicle that participated in an International event, BAJA SAE Illinois 2017 in the USA. In its first endeavor at international grounds, Albatros 6.0 was the 7th fastest vehicle and 9th in overall dynamics.

Continuing the legacy of the team, Albatros 7.0, the best Albatros then, won a total of four awards in the season 2018-19. Among them were, 2nd in Endurance Race, 3rd in Cost event, and Overall 2nd Runner-up in Enduro Student India 2018. The BAJA SAE India 2018 was more challenging than in previous seasons. The team stood 2nd in the 4 hours Endurance Race, winning the Runner-up Durability Award. The design of the vehicle was appreciated throughout the event, for which it even scored the second highest. The vehicle finished the Suspension and Traction event in 95 seconds, securing third rank in it.

Albatros 8.0 was our second vehicle which participated in more than two events. Heading into a busy domestic season of BAJA SAE India in January 2019, followed by Enduro Student India in February 2019, the vehicle made its international appearance in BAJA SAE USA at Rochester, NY, USA in June 2019. The vehicle had a Top 5 finish at both the local events while bagging 1st in Design, 2nd in Cost, and 3rd in Endurance at ESI, Pune.

Albatros 9.0 was a product that resulted from drastic changes and enhancements in the vehicle design. Improved coil-over suspension replaced Fox pneumatic suspension, while a completely redesigned CVT ‘S1’ replaced v1.0. Owing to these changes, the vehicle was ranked 3rd in Design and 2nd in Rock Crawl in BAJA SAE India 2020. It was in ESI 2020, however, that the vehicle truly shone. The team stood 1st in Cost, 1st in Design, 4th in Sales, 2nd in Endurance, Fastest Lap, and Overall Runners-up. An outbreak of the COVID-19 Pandemic resulted in the cancellation of Dynamics of BAJA SAE USA 2020, Arizona. In the Statics events that followed, the team ranked in the top one-fifth amongst all participating teams.

Season 2020-21 marked the 10th year of Team Red Baron. This was one of the most challenging years considering the number of unprecedented situations faced by the team. Even though the entire team was unable to get together for the design and manufacturing of the vehicle, the coordination shown by the team was commendable. Albatros 10.0 being the first four-wheel-drive designed and developed by the team, was a major change from the previous seasons. In view of this decision, various changes were made. In February 2021, the team participated in the Baja SAE International Knowledge Event in which we stood as the 2nd runner up for Cost Event, 5th in Design Event, and attained an overall rank of 10th. Following this success, in April 2021, the team appeared for Baja SAE India 2021 static as well as dynamic events which were held on a virtual platform. In this event, we were able to lead the Design standings and be the 2nd best FWD vehicle.

This was the team’s 11th year participating in Baja SAE India and also one of the most successful years in its history. Albatros XR, the successor of Albatros X, was the first 4WD ATV of Team Red Baron to participate in the Dynamic events. The initial manufacturing phase began at the time of the second wave of corona which was challenging due to numerous restrictions. Rigorous testing of the vehicle was carried out. The event was postponed two times yet the determination was still alive. The team participated in Baja SAE India which was held in April 2022. We completed our Technical Inspection in our very first attempt and were the first team to do so. In the static events, the team stood 2nd in the CAE event, 3rd in Design and Cost, and 4th in the Sales event which helped us to 1st rank in Overall Statics. Albatros XR was ranked 4th in the 4-hour long endurance and ultimately received an Overall 4th Rank for this season. Out of these achievements, the most remarkable ones were the Best 4WD ATV Award and 1st Rank in Overall Statics. With these achievements, an era of Team Red Baron came to an end with the team entering into a new era of Team Red Baron Electric.